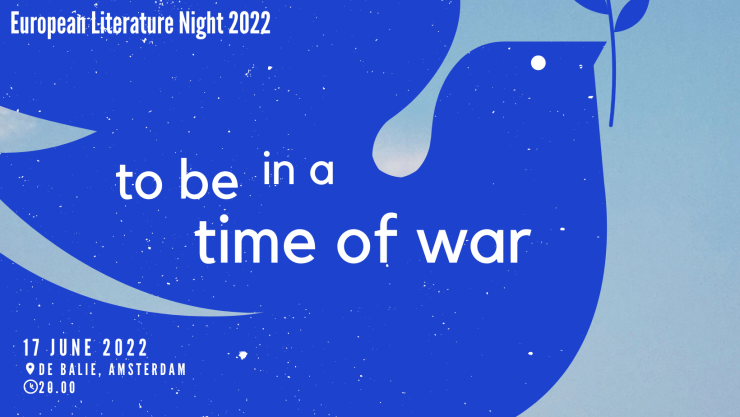 In many ways the highlight of the EUNIC Netherlands calendar, the European Literature Night brings together both celebrated authors and promising literary talents from all over Europe. Writers are invited to tackle a central theme in small panels, led by a moderator. There is room for debate, for the reading of excerpts, for monologues and key-notes. The Night is a space for exploration, for understanding differences and recognizing similarities, for both authors and the audience to reimagine ‘Europeanness’. As such, each year, the European Literature Night sketches an impressionist, fragmented and dynamic picture of the European literary landscape.

During the European Literature Night 2022 we explored European literature in times of war. We invited writers and poets to think about the effect of the war in Ukraine on Europe’s past and future. How can the literary imagination create understanding and insight in the history that has led to this war? Have we been naïve or even blind, taking our freedom and rule of law for granted? Is our past still the same, or should we revisit it, reconsider its fundamental lessons? And what are the lessons for the future?

You can rewatch it below:

This year’s topic The Courage of the Writer was explored by twelve writers from Europe: Monique Roffey (UK/TT), Boštjan Videmšek (SI), Olivia Wenzel (DE), Laurent Petitmangin (FR), Christoph Schneeberger (CH), Andrea Bajani (IT), Jan Škrob (CZ), Moni Stanila (RO), Elia Barceló (ES), Ramunas Bogdanas (LT), Maarja Kangro (EE), and Max Temmerman (BE). The poets and novelist addressed how a writer should relate to the burning issues of European societies and what courage Europe needs from its writers amongst other questions. Moderated by Margot Dijkgraaf and Guido Snel, the event took place in De Balie on the 19th of June.

You can rewatch the event here.

In 2020, the European Literature Night was part of the Forum on European Culture‘s programme and was paired with the State of European Literature, a key note co-organized by UvA. 2020’s theme‘Literature, the Antidote’, took European writers as a starting point to explored our world after the Covid-19 pandemic.

Information about the edition of 2020 can be found on our event page.

Themed ‘the library’, the 2019 European Literature Night was the result of a collaboration with the Amsterdam Public Library to celebrate its 100th anniversary. Partly taking place at the library, partly at De Brakke Grond, the European Literature Night reunited twelve writers and poets from all over Europe to talk about librarians and readers, accidental encounters with books and people, the first library they ever visited, about nostalgia for paper and dust, endless rows of books on shelves, the thrill of digital texts available world-wide. In other words, about the past and future of reading.

The 2018 edition of the European Literature Night took place at two locations: Amsterdam, and the Cultural Capital of Europe 2018, Leeuwarden. On Tuesday a dozen authors from all over Europe met in Leeuwarden, before reconvening on Wednesday in Amsterdam to discuss the theme “What time is it?”. The evening was full of stories, poetry and cinema, once again moderated by Guido Snel, lecturer in European Studies at the University of Amsterdam.