One of our favourite events of the year is back!

During the European Literature Night 2022 we explore European literature in times of war. We invite writers and poets to think about the effect of the war in Ukraine on Europe’s past and future. How can the literary imagination create understanding and insight in the history that has led to this war? Have we been naïve or even blind, taking our freedom and rule of law for granted? Is our past still the same, or should we revisit it, reconsider its fundamental lessons? And what are the lessons for the future?

Moderators Guido Snel and Margot Dijkgraaf will discuss these questions with:

Thomas Heerma van Voss is a Dutch author and essayist. He published the novels Stern and Condities (longlist Boekenbon Literatuurprijs and Libris Literatuurprijs). He also writes essays, articles and short stories. In the spring of 2022 his collection of short stories Passengers / Achterblijvers was published.

Laura Freixas is a Spanish novelist, short story writer and columnist. Freixas is one of the most significant feminist voices in Spain. Her interest in gender is a longstanding one and she edited and wrote the prologue for the important anthology of female-authored short stories, Madres e hijas (1996). Other works with a focus on women include Literatura y mujeres (2000) and La novela femenil y sus lectrices (2009).

Nataša Kramberger is a Slovenian writer and journalist. Her book Heaven in a blackberry bush: a novel in stories won the EU Prize for Literature in 2010. In 2009, she founded the eco-art collective Green Central, where she promotes ecology and art. She lives in Berlin and travels frequently.

Dana Grigorcea is a Swiss-Romanian writer. Her most recent novel Die nicht sterben (2021) received the Swiss Prize for Literature and was nominated for the German Book Prize. She also writes columns for Die Zeit and Deutsche Welle and is active in advocating for a free and democratic Europe.

Jitka Bret Srbová is a poet and journalist. From 2006 to 2011 she was the editor-in-chief of the literary online almanac Wagon. She currently contributes to the fortnightly literary journal Tvar. She has published the poetry collections Někdo se loudá po psím (Someone is Hanging Around like a Dog, 2011), Světlo vprostřed těla (The Light in the Centre of the Body, 2013), Les (Forest, 2016) and Svět: (The World:, 2019).

Rein Raud is an Estonian scholar and author. As an author, Raud has published five collections of poetry, seven novels and several collections of short stories and plays, including The Reconstruction (2012) and Vend (2008). As a scholar, Raud has published on a wide range of subjects from cultural theory to pre-modern Japanese literature and philosophy, both in English and Estonian. He is also well-known for his translations of Japanese classical literature into Estonian.

Katja Petrowskaja born in Kyiv in 1970, has lived in Berlin since 1999. She studied literature in Tartu, Stanford and Moscow and works as a journalist for German and Russian-language media. Her literary debut Maybe Esther (2014) has been translated into over 30 languages ​​and has received numerous awards. She lives in Tbilisi and Berlin.

The European Literature Night will take place on June 17 at 20.00 in De Balie.

The State of European Literature

On 16 June 2022, at 19:30, the renowned writer Alain Mabanckou will deliver the third State of European Literature, ‘Pour une autre Europe’ (‘For a different Europe’) in the Agnietenkapel. The State of European Literature is an annual lecture delivered by a renowned author or poet of international stature, about the state of literature and the state of Europe through the perspective of literature. Register here to attend the event on location or join the livestream. 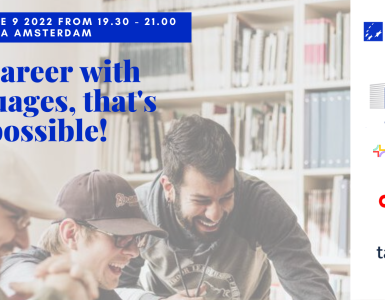 A Series of Lectures on Multilingualism: A career with languages, yes, that’s possible!

Do you sometimes dream of making language your profession? Or have you completed a course in language or communication and are wondering how you can use that in the labour market? Then you should not miss this evening...