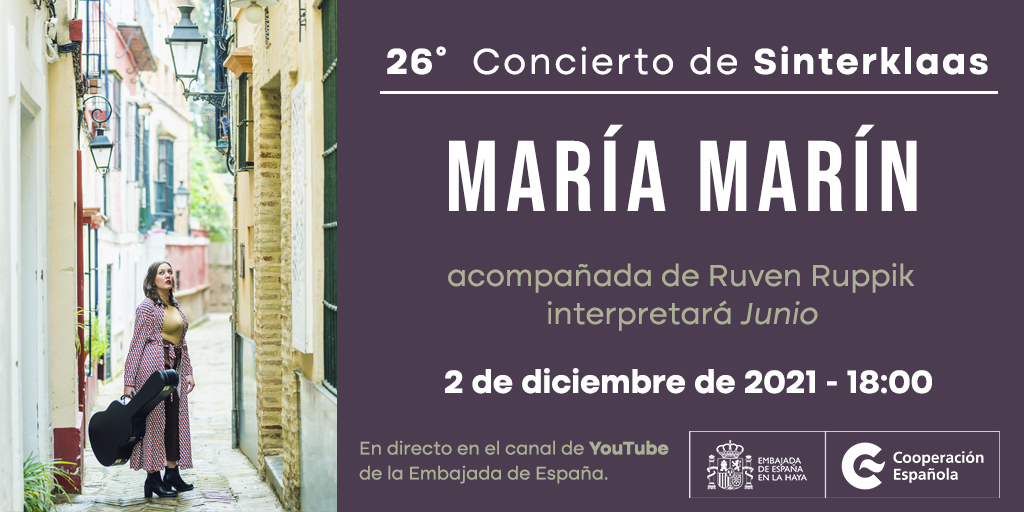 The Embassy of Spain in The Hague organizes its annual concert on occasion of the celebrations for St. Nicholas (Sinterklaas), who, according to Dutch tradition, travels from Spain to the Netherlands to bring gifts to the children.

For this Christmas celebration, Spanish singer and guitarist María Marín will perform for the public online, presenting her first solo album Junio, in which she collected her most recent experiences, and where she revisited places and sounds from her childhood in Utrera, Andalusia. Ruven Ruppik, a percussionist who studied classical percussion, will accompany her during the performance.

María Marín currently resides in the Netherlands, where she moved to pursue a master’s degree in classical guitar at the Royal Conservatory in The Hague. She started studying at the conservatory of Utrera, and, throughout her career, she has participated in various musical projects. Genres such as jazz, classical music, and flamenco have marked her path.

This year’s edition of the concert, due to the Covid-19 situation, will take place online with a live broadcast on the Embassy’s YouTube channel on December 2, at 18:00. It will also be available online at the VIMEO channel of the Spanish Agency for International Development Cooperation (AECID), within the VENTANA program.

Embassy of Spain in the Hague