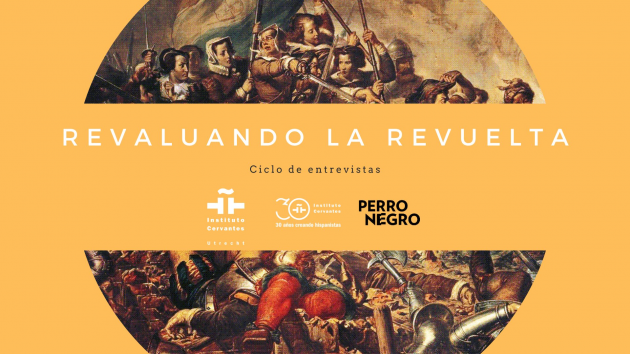 The Instituto Cervantes Utrecht is honoured to introduce you its new project: a series of three interviews on the so-called Dutch Revolt and the Eighty Years’ War.

With the purpose of providing the public with a new perspective, three historians have been invited to discuss and revaluate several aspects of the on the decennial conflict, namely the Dutch involvement, the struggle of the Spaniards, and the formation of the Dutch identity. Furthermore, themes such as the birth of the nation, as well as the spread of the conflict beyond the borders of Europe and its legacy in the Americas and Southeast Asia will be raised. The focus is particularly placed on the initial phase of the conflict and how that changed over time, and on the historical and political impact worldwide.

The appointment is on the YouTube channel of the Institute on the following dates:

The distinguished guests of the series will be interviewd by Juan Toledo, journalist of the Perro Negro magazine. The historians are:

Raymond Fagel, assistant professor at Leiden University. Both in his teaching and his research, he focuses on the Renaissance period, in particular on relations between the Netherlands and Spain during the period of the first Habsburgs.

Bernardo García, an associate professor in the Department of Modern History at Complutense University in Madrid. He is a member of the Editorial Board of Cuadernos de Historia Moderna, and of the Advisory Board of: Anuario Lope de Vega, Commedia dell’arte and e-Spania.

Visit the website of the Instituto Cervantes to know more about this series of historical interviews and many more events.