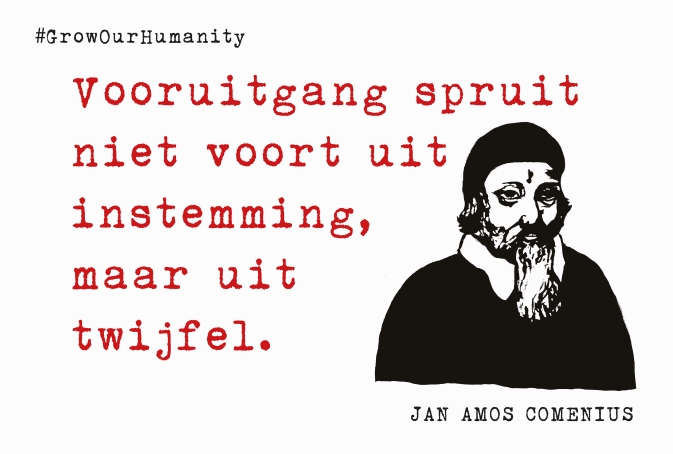 Last week the Czech Centre in The Netherlands launched #GrowOurHumanity project. It is a hybrid campaign bringing humanistic inspiration for our turbulent world by placing inspiring quotes by Czech humanists who were also involved politically (Václav Havel, Jan Patočka, T. G. Masaryk, J. A. Komenský) to the Dutch public space. The project aims to bring an optimistic message, think positively, share the emphasis on humanity and encourage discussions about the future visions of the world. It is more than relevant in these turbulent times when facing the COVID-19 pandemic and other urging global issues.

Last week we started with Comenius , you might have noticed that on the EUNIC Facebook. Initially, there is a special focus on Jan Amos Comenius to remember the 350th anniversary of his death. Comenius (1592-1670), Czech philosopher, humanist and the father of modern education, spent the last 14 years of his life in The Netherlands and is buried in Naarden. He is particularly known for his teaching methods´ innovations. #GrowOurHumanity – Comenius has been shared with the Comenius Museum Naarden and the National Museum of Education in Dordrecht.

In December we will focus on Václav Havel, the last Czechoslovak and first Czech President. We will have two banners with Havel´s quotes in front of the Embassy in The Hague. It will be on December 10th when the Human Rights Day is celebrated annually across the world.

Each Monday we are posting a quote of the week to start a new week with a positive thought. Soon you can also follow us on Instagram @growourhumanity