What better than a great news can warm up a cold, rainy day of November? EUNIC Netherlands has the pleasure to announce that our Dutch Cluster has a new, enthusiastic Board! In the last weeks our international team voted to elect the colleagues that will represent the Cluster during the upcoming events, taking over the splendid job done up until now by the current Board. The members were more than happy to vote Nina Hauer as new President, and we cannot wait longer to introduce her to you 🇭🇺🇳🇱🇪🇺

Nina is the Cultural Manager of the Embassy of Hungary in the Hague and, since the very beginning of her career at the Hungarian Embassy, she has been one of the most active members in EUNIC Netherlands. Stepping in as Vice-President side by side with Daria Bouwman, she contributed enormously to several projects, including two of the most successful ones of 2021: the European Day of Languages, and EuropeReadr.

Read her interview below and get to know better the new Ms President.

As Cultural Manager of the Embassy of Hungary in The Hague I am involved with the promotion of Hungarian art and culture here in the Netherlands. We see where we can offer which support to both starting and more well-known talent. We work closely with the players in the Dutch cultural field to further promote Hungarian artists and give them the platform they deserve. Hungary has a rich cultural history with big names, but there are also many interesting developments in the current Hungarian cultural field worth sharing.

I became active at EUNIC Netherlands immediately after starting at the Hungarian Embassy in April 2019. After co-organizing the yearly European Day of Languages event, which aims to draw attention to the numerous languages spoken in Europe and strives to emphasize the value and advantage of learning new languages, I joined the EUNIC NL board as Vice President for two years and took over as President this month. I try to contribute by always looking for new opportunities to work on EUNIC NL’s mission to promote cultural diversity and understanding between European societies, by finding new partnerships and events that share that mission. This year I was, amongst others, involved with Europe Readr, an initiative of the Slovenian Presidency of the EU Council, which brings current social issues to readers around the world through a free selection of literary works from across the European Union. We managed to realize a reading pavilion designed and created by students from TU Delft, which travelled through the Netherlands, promoting the value of reading and dialogue. Connecting opportunities and people is really what I enjoy the most.

Since EUNIC Netherlands is the framework through which European national cultural institutes and other cultural representatives of European countries in the Netherlands co-operate, it is a very interesting group of people that I get to work with. So many different nationalities around the same table, so many people to get inspired by. A pool of knowledge and enthusiasm about building bridges through culture. I look forward to seeing what we can achieve altogether next year with some returning events, but definitely also some new initiatives. Make sure to sign up to our monthly newsletter to stay informed about our plans!

Thank you, Nina Hauer, for showing all your enthusiasm for the projects you worked for with EUNIC Netherlands’ team, and good luck with your new role as President of our beautiful Cluster! We are all confident you will do, as always, an amazing job.

In November we introduced you the new President of EUNIC Netherlands, Nina Hauer, and it’s time now to complete the round of presentations announcing the latest acquisition of the new Board of our Cluster: Sophia... 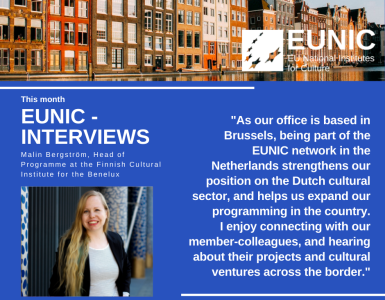 It might surprise you, but not every member of EUNIC Netherlands is based in a Dutch city. Indeed, the Finnish Cultural Institute is one of the national institutes for culture that is part of our Cluster although has...