Those who work in the cultural field like us know how busy and full of events this month is. During the first weeks of autumn, indeed, the whole country farewells the warm season and gets back to business with hundreds of initiatives over the entire national territory. EUNIC Netherlands’ Cultural Institutes and Embassies organised plenty of events to bring European beauties and values closer to the local communities. And Éva
Jároli-Kóti – our interviewee of the month – represents a splendid example of the Embassy of Hungary‘s engagement in EUNIC’s September activities 🇭🇺🇳🇱🇪🇺

Éva is a very active member of our cluster, who was multiple times involved in the organisation of some of EUNIC’s most remarkable events. In particular, she greatly contributed to the success of the European Day of Languages 2021, which brought several classes of secondary school pupils from Dutch schools to experience European linguistic variety through fun lectures in OBA Amsterdam.

As a diplomat at the Embassy of Hungary, I am responsible for culture, press and domestic politics. As a cultural attaché my goal is to strengthen Hungarian cultural diplomacy by promoting Hungarian culture in the Netherlands. This beautiful mission is very diverse: in some cases we promote Hungarian composers, artists, and musicians already known in the Netherlands and, in other cases, we help to discover new talents.

The Embassy of Hungary has been actively involved in the management of the EUNIC Netherlands cluster for many years. The current cultural manager, Nina Hauer, has been vice-president since 2019, and her predecessor was president for two years. I personally also participate actively in the work of the cluster; I am regularly involved in organising various projects related to the most various topics – from language to literature, from music to films.

For three years I have been one of the main organizers of the event organized by the EUNIC Netherlands cluster on European Day of Languages. The event aims to promote linguistic diversity as a tool for better intercultural understanding. Within this initiative, through workshops and speak-dates we introduce several European languages to secondary school students and the wider Dutch audience.

The EU is about “unity in diversity”, and the EUNIC Netherlands cluster is an excellent reflection of this. We can learn a lot from each other by sharing best practices, and we can strongly support each other’s work and goals through our joint projects. Overall, it is great to organise events where we can show the pearls of Hungarian culture, but sometimes it is even greater to show how diverse the culture of Europe is.

Thank you, Éva Jároli-Kóti, for your precious insight on what it means to you to be part of EUNIC Netherlands. 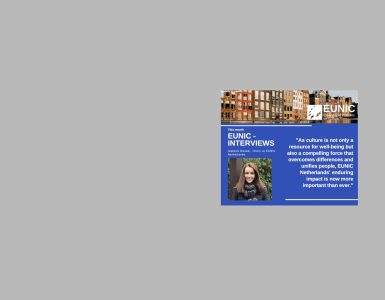