Launching for the first time this week, EUNIC – Interviews will, over the next months, be reporting member organizations representatives’ own stories. First up is, Hélène Doub, cultural attaché and deputy director from the Institut français des Pays-Bas.

Since 2018, I have been a Cultural Attaché at the French embassy in the Hague and Deputy director of the Institut français des Pays-Bas. I am based in Amsterdam but my activity covers The Netherlands. My role is to foster cultural cooperation between France and The Netherlands at a bilateral but also at a multilateral level. In concrete terms, together with my team, we organize cultural events in cooperation with Dutch or European partners; we stimulate a network of cultural actors who work with French artists or thinkers; we build bridges between the French cultural scene and its Dutch partners and we support, in financial, technical and communication terms, the efforts made by our partners to promote the French and francophone scene. But this also goes the other way round. We are doing a lot to encourage the emergence of a European sense of belonging through education, culture and multilingualism.

As a representative of one of EUNIC’s Members, the Institut français des Pays-Bas, but also as a European citizen, I take our main tasks as a EUNIC cluster seriously: improving and promoting cultural diversity and understanding between European societies and contributing to the definition of a European cultural policy which will endorse an independent voice for the cultural sector. Therefore, I participate actively in EUNIC Netherlands cluster’s meetings and events, and I contribute as a project coordinator with other members to the European Literature Night, which is one of EUNIC’s highlights during the cultural season. This brings me to make concrete steps every day alongside my European colleagues to set up a program and create a real dialog between diverse sensibilities.

I had the chance to take part to several EUNIC clusters as a member or as a partner. Each time it was a very fruitful experience. Within EUNIC, members can enjoy a very collegial atmosphere. We learn how to take advantage from our diversity and become more conscious of our common grounds.What I really value within EUNIC is the opportunity to share experiences or good practices and to learn from each other. We all have very different backgrounds, sometimes also different priorities, but the quality of the dialog leads to fertile compromises.As Robert Schuman, one of the Fathers of Europe, said : « Europe will not be built all at once, nor in one go: it will be built through concrete achievements ». EUNIC illustrates well this prophetic thought.

Thank you Hélène Doub for your interview! 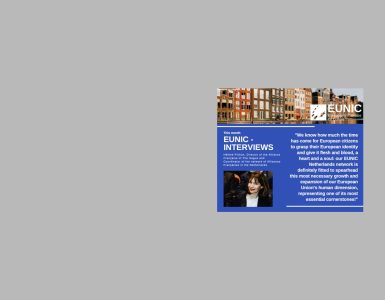 This month, meet Hélène Pichon, the Director of the Alliance Française of The Hague and Coordinator of the network of Alliances Françaises in the Netherlands. Discover all about Hélène’s contributions to EUNIC...