“Women and Science”, the first part of the double bill, was a tribute to Margarita Salas, the recently deceased Spain’s leading female scientist whose work shaped the study of DNA. With the support of the Czech Centre and the Embassy of Austria, the event was also backed by FECYT (Foundation for Science and Technology, Spain’s Ministry of Science, Innovation and Universities), Club Iberia at E.P.O. and CENL (Spanish Scientists in the Netherlands). The Ambassador of Spain welcomed the public. The debate was moderated by Pilar Tena (director of Instituto Cervantes) and the speakers were the three scientists Mara Dierssen, Francisco Colomer and Noelia Lozano-Vidal, Czech writer Marketá Baňková and Austrian artist Sonja Bäumel. Two videos depicting Margarita Salas were shown.

After the break, and in the second part of the program coordinated by the Institut Français des Pays-Bas as part of Book Week and International Women’s Day, Margot Dijkgraaf, writer and literary critic, presented her new book ‘They took the floor. Rebellious writers in French literature’ (Atlas Contact, 2020). The book offers portraits of enthusiastic and inspiring writers who changed the history of literature. Why should we continue to read the work of George Sand, Colette and Françoise Sagan? What can we learn from Simone de Beauvoir, Annie Ernaux and Maryse Condé? Ten women who wrote, spoke, went on the barricades, broke taboos and went beyond the limits. Ten writers who still offer inspiration tod: through their books, their character, their actions or ideas.

The event was fully booked and OBA’s welcome to the Women’s Day commemoration was delivered by Roel van den Sigtenhorst, responsible for OBA’s House of all Languages. 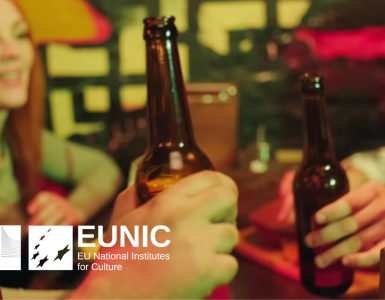 May I have a beer please?

How to order a drink in multilingual Europe. EUNIC Netherlands has the pleasure to announce the fourth appointment of its series on multilingualism, and invite you to join us for this online event on December 16, at...